Internationally known artist Kenneth Webb is represented in Ireland by the Kenny Gallery, Galway and in the U.K. by Gladwell & Patterson’s, Knightsbridge, London.

In 1953 he was appointed Head of the Painting School, Ulster College of Art. In 1957 he founded the Irish School of Landscape Painting and has since lectured for Queen’s University Belfast, and in the Tate Gallery, and National Gallery, London.  Publications include “Kenneth Webb” (1974) Shenval Press, London, and “Webb, a Profile” by Thomas Kenny (1990) and Kenneth Webb: “A Life in Colour” by Josephine Walpole.

He has had so many exhibitions over the years, they would fill pages.  He has had solo exhibitions all over Europe, China, and the USA.  His last big exhibition in Ireland was “Kenneth Webb and the Tec-Tank” where over 170 paintings were shown in one space.  The Kenneth Webb Foundation co-hosted the event with Gladwell & Patterson’s London.  Kenneth at 92, painted 12 new of his largest painting of the Irish Bog just for the exhibition.  The Tec-Tank part of the exhibition was brought by his grandson, Donovan Webb and included Virtual Reality, 3D walks in the garden at Ballinaboy, Connemara and the Bog and many other surprises.  It was a huge success and allowed many of his fans to see so many pictures in one place and talk with Kenneth, himself.

An inspiring teacher, many of his past pupils are members of professional bodies, RHA, RUA, etc.. Approaching 94 years, he now spends time painting, less time teaching and is a visiting Tutor at the Irish School of Landscape Painting. 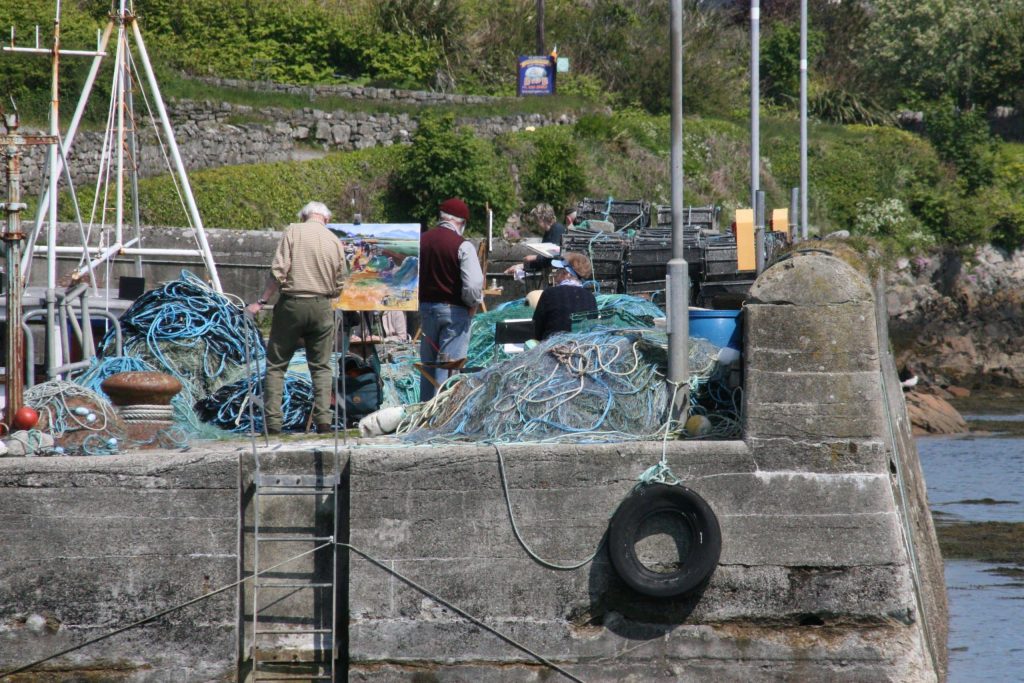 Kenneth, at 92, painting on the pier at Roundstone, Connemara amongst the nets and fisherman.  It is marvelous that when he paints, he is oblivious to anything but his painting and is a part of the overall scene.  For the locals, they are used to and comfortable with Kenneth and work around him perhaps realising that they will be immortalised on canvas.

This website uses cookies to improve your experience while you navigate through the website. Out of these cookies, the cookies that are categorized as necessary are stored on your browser as they are essential for the working of basic functionalities of the website. We also use third-party cookies that help us analyze and understand how you use this website. These cookies will be stored in your browser only with your consent. You also have the option to opt-out of these cookies. But opting out of some of these cookies may have an effect on your browsing experience.
Necessary Always Enabled
Necessary cookies are absolutely essential for the website to function properly. This category only includes cookies that ensures basic functionalities and security features of the website. These cookies do not store any personal information.
Non-necessary
Any cookies that may not be particularly necessary for the website to function and is used specifically to collect user personal data via analytics, ads, other embedded contents are termed as non-necessary cookies. It is mandatory to procure user consent prior to running these cookies on your website.
SAVE & ACCEPT

Subscriptions include access to all Livestreams and over 100 Recordings Dismiss